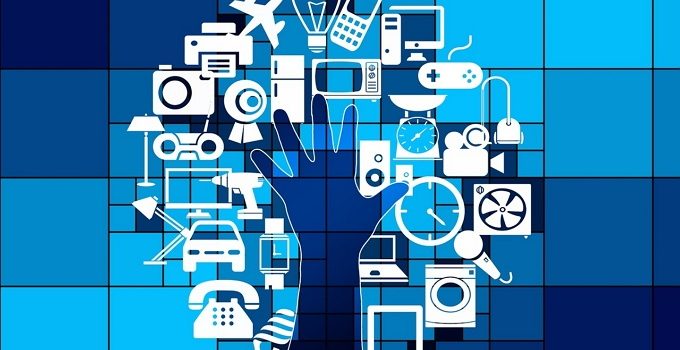 The function of this Internet service, of course, allows you to access the Internet, ranging from personal life information, hobbies, personal development, business, economics, forums, and so on. This time will be discussed further on one of the existing Internet services, namely Gopher.

Gopher itself is a software application in which it contains menus regarding information retrieval systems. But unfortunately, nowadays it is very rare that people use gopher applications, maybe even almost nothing. But it doesn't hurt if you listen to the following Gopher's understanding.

Ghoper is a software application which is composed of menus of information retrieval system. Sites that use Gopher services or protocols are actually menus that represent existing information and data.

Basically, the menu here is the table of contents to process and show certain information. This Gopher service uses FTP as a way in file Exchange as well as Telnet (Tele Networking) on certain server connections. Although the current gopher services are rarely used, there are still a few small populations that still become active servers. 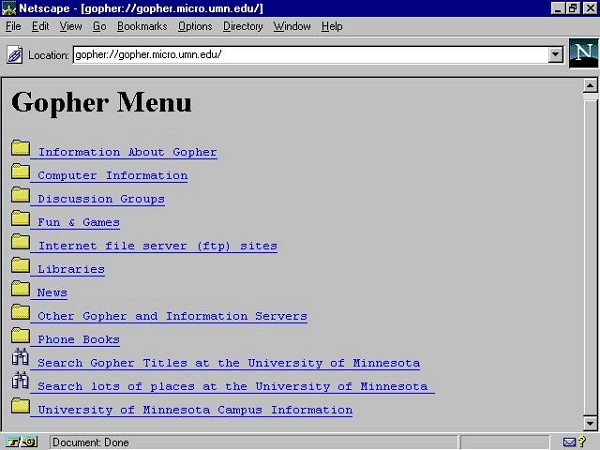 This gopher protocol offers a wide range of best features but is not supported with Native Web. However, Gopher uses a stronger hierarchy in the information contained therein.

Gopher has a system with the most basic menu base by providing connectivity which will connect between the files that are in the computers on the Internet. The files will look like a serial directory that is around the Gopher menu, whereas those files are actually located on other computers.

Not only that, Gopher also provides access to text documents, for digital sound and graphics can only be the same as the downloaded document set first on the local computer. Then you can see it just like any other program. Gopher also allows its users to access other facilities on the Internet, for example Telnet that can facilitate in remote communication.

With the Gopher application, users do not need to know the specific address that is on the computer used. The application gopher itself is a system that can enable users to access any existing sites.

Not only that, Gopher is also a system that has automation so that users can access various existing information using hierarchy. 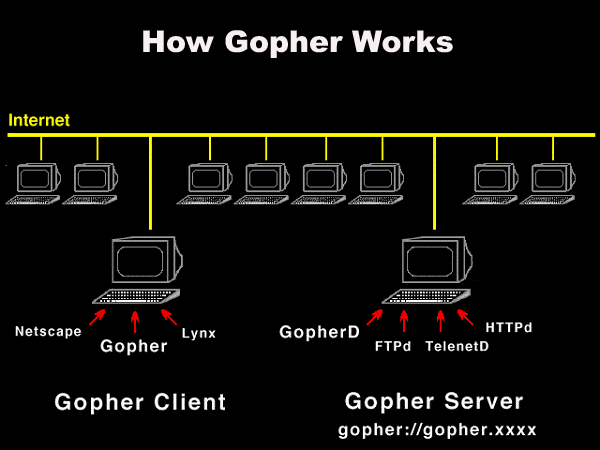 The way this Gopher protocol works is to search for documents or data based on text or the base text. However, the computer must be connected in advance with the Internet connection on the server gopher and then store the information and data. This type of old gopher protocol is too complicated that sometimes causes people to start leaving the service. The development of the Gopher protocol was conducted by several university students in Minnesota, USA.

The meaning of the Gopher protocol itself is the Protocol of publication of information with the character base, which in order to access the text of the user should use the menu hierarchy. The display in the Gopher system is almost identical to Telnet.

Example Gopher protocol you can find on some devices, such as modem and router. The difference from Gopher to Web is on its use of ports. On the web usually uses port 80 and can display images. As with the Gopher, it uses port 70 and can only display text only.

Advantages of Gopher
Gopher deficiency
Well that's the explanation related to the notion of gopher, along with the advantages, disadvantages, workways, and functions of the application gopher. Although it is now starting to be abandoned, the gopher can also be relied upon to find all the information you need on any site.