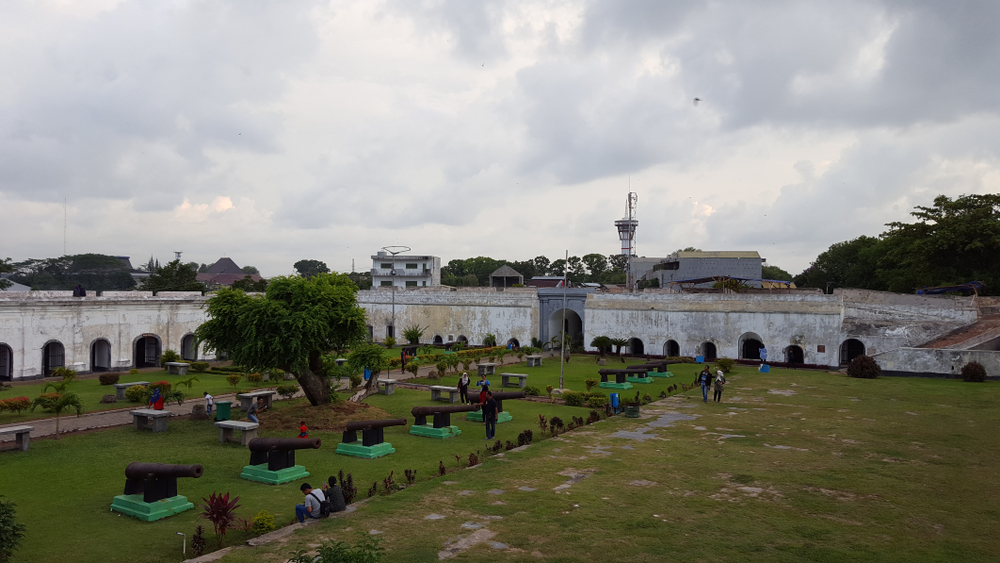 Enchantment of Bengkulu Tourism . Fort Marlborough(English:Fort Marlborough) is a British fortress in the city of Bengkulu. This fort was founded by the East India Company (EIC) in 1713-1719 under the leadership of governor Joseph Callet as a British stronghold. That said, this fort is the strongest fortress of England in the East after the fortress of St. George in Madras, India. This fort was built on an artificial hill, facing the city of Bengkulu and the back of the Indian Ocean. This fort was once burned by the people of Bengkulu; so the inhabitants were forced to flee to Madras. They then returned in 1724 after an agreement was held. In 1793, another attack was launched. In this incident a British officer, Robert Hamilton, was killed. And then in 1807, resident Thomas Parr was also killed. Both were commemorated with the establishment of monuments in the city of Bengkulu by the British government.

After about 140 years the British Government was in Bengkulu, they left many "legacies" of historic heritage. One of them is the tourist attraction area of ​​Fort Marlborough. Fort Marlborough is a sturdy British heritage built from 1713 to 1719 during the reign of Governor Joseph Collet. The name of one of the bengkulu tourist charm areas uses the name of a British aristocrat and hero, namely John Churchil, Duke of Marlborough I. This fort is considered the largest in the Asian region. This historical legacy has great appeal because of its rarity.

Fort Marlborough as a Fortress

Marlborough still functioned as a stronghold until the Dutch East Indies period of 1825-1942, Japan in 1942-1945, and during the Indonesian war of independence. Since Japan lost until 1948, the fort became a National Police headquarters. However, in 1949-1950, the fort of Marlborough was reoccupied by the Dutch. After the Dutch left in 1950, the fort of Marlborough became the headquarters of the Army. Until 1977, the fort was handed over to the Ministry of Education and Culture to be restored and used as a cultural heritage building.

Enchanting Tourism of Fort Marlborough since it began to be built has held strategic functions in the fields of ideology, politics, economics, social, culture, defense and security. Such historical potential is an interesting research commodity. This potential has great value in enriching scientific studies. John Bastin in his book entitled: The British in West Sumatra (1685-1825) A Selection Documents with An Introduction . Kuala Lumpur: University of Malaya Press, 1965., provided a lot of information about the events around the area of Bengkulu's tourist charm .

SFR (Sumatra Factory Record) at Madgrlborough Fort
Even more interesting is the use of official documents from the British government centered on the tourist attraction area of ​​Fort Malborough, including documents called SFR (Sumatra Factory Record). As one of the interesting information from John Bastin that the tourist charm of this fort had been abandoned by the British government for almost five years, namely in 1719-1724. Of course it is interesting to find out more about who ruled Fort Marlborough during 1719-1724, and what actually happened during those five years.

Enchantment of Marlborough Tourism as the British Colonial Fortress in Bengkulu

Fort Marlborough is the largest fortress built by the British colonial in Southeast Asia and located in the center of Bengkulu city facing the sea. Fort Marlborouh measures 240 x 170 meters and is square in shape. Although it looks impressive, Fort Marlborough was only used twice, namely during the rebellion by the Indonesians (1719) and by the French in 1760. British troops came to Bengkulu (Bengcoolen as the British) in 1685 and established a pepper trading post. Nearly twenty years later in 1713, during the reign of governor Joseph Callet, they carried out the construction of a fortress which was completed in about six years.

The British conduct economic activities in Bengkulu with the pepper trade business because of the lack of pepper in the surrounding land. The British insisted on living and surviving in Bengkulu for 100 years 1825 even though under the Anglo-Dutch agreement of 1824, Bengkulu was transferred to the Netherlands. President Sukarno was then interrogated by the Dutch for several hours in one of the cells after his capture in 1929. The Dutch left Bengkulu after the Second World War and then Indonesian police used this fort, after independence.

During the reign of Thomas Stamford Raffles in 1818-1824 Bengkulu became famous. In 1825 the British who controlled Bengkulu exchanged with the Dutch who controlled Malaysia and Singapore. The Netherlands then occupied the Malborough fortress until World War II which in the end all Sumatra was occupied by Japanese troops until the Japanese surrender in 1945. After Indonesian independence in 1945 the fort was used by the TNI and police until 1970. After the independence of the Republic of Indonesia Bengkulu was one of the residencies in the Province of South Sumatra, only in 1968 did Bengkulu become a province that stood alone and separated from the Province of South Sumatra.

Facilities offered at Fort Marlborough
What is offered to visitors of this attraction? The visitors can see the great power of the colonial invaders in his time with the building of a large fort and still fully equipped. Then enjoy the panoramic view of the sea from one side of the fort which is indeed beautiful in the afternoon, for lodging tourists do not need to bother anymore, because there are hotels and inns in a maximum radius of 1 km from this fort. Fort Marlborough was renovated on a large scale in 1977 which later made it a museum as well as a historical legacy for the city of Bengkulu.