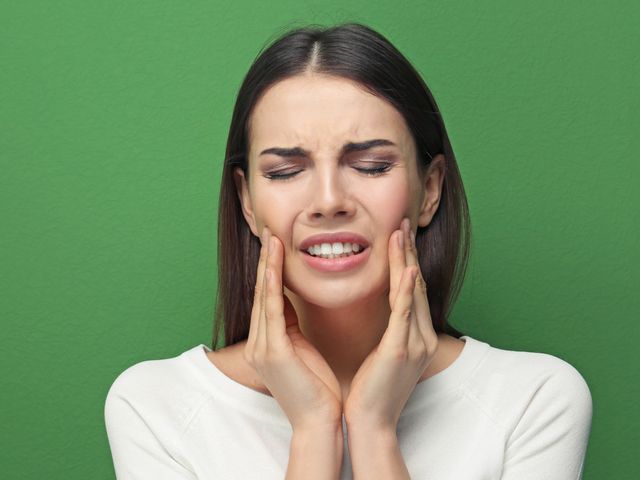 When there is inflammation of the gums, the gums will appear swollen, reddish compared to normal gums, and bleed easily when brushing. Inflammation of the gums is generally chronic and does not cause gum pain. This makes most people realize too late and only come to the doctor after a complaint such as loose teeth.

1. Food impaction
Food impaction is a situation when the food we chew gets stuck between two teeth or on the gums. Generally, fibrous foods such as meat are most often impacted. The complaints you feel when you experience this are pain and discomfort at the site of the impact. The pain may disappear after a while and come back with the next meal. The pain you feel will disappear completely when the rest of the food has been removed. Apart from being sick, if this food is left idle it can cause caries. You can remove it by using a toothpick or dental floss.

2. Pericoronitis
Acute pericoronitis infection is an infection that commonly occurs in teeth that are partially erupted (growing) and partially covered by gum tissue usually occurs in wisdom teeth, or molars that are located at the tip. This causes severe gum pain that can be felt suddenly. In addition, gum pain can also appear when you close your mouth. In more severe cases, there may be limited opening of your mouth and the pain may get worse when chewing. This inflammation of the gums requires a doctor's action to overcome it, for example by removing the opposing tooth to prevent trauma. It is recommended that you rinse your mouth with normal saline or antibacterial fluids. In severe cases that cause limited mouth movement or fever, the patient can be given antibiotics.

3. Bacterial infection
Gum pain due to bacterial infection occurs in conditions of Acute Necrotizing Ulcerative Gingivitis (ANUG) or acute ulcerative gingivitis. This condition is rarely found in people with good immune system. People with immunocompromise (decreased immune system), such as people with HIV / AIDS with low CD4 cell counts and chronic malnutrition are prone to developing this condition. People with HIV are more susceptible to oral health, because HIV itself weakens the sufferer's immune system. As a result, the infection is hard to beat. According to the World Health Organization (WHO), about 40-50% of people with HIV have oral infections that can cause complications in the mouth. In this condition, the pain is generally felt at the border of the gums, accompanied by bleeding and tissue. necrosis. The pain you experience can get worse when you eat and brush your teeth. One of the hallmarks of ANUG is a mouth that smells of iron, and sometimes fever and malaise may occur.

4. Virus infection
Gum pain can also be experienced in children with primary herpetic gingivostomatitis. This disease is an infection of the herpes simplex virus type 1 which causes inflammation of the gums. The gums and surrounding mucosa that are infected will appear reddish, shiny, swollen, and may be accompanied by bleeding.

In the early days, small bumps appear in large quantities on the gums, surface of the oral cavity, or the tongue. After 24 hours the flex will burst, forming a wound that causes pain. Apart from gum disease, children can also experience fever and feel weak.