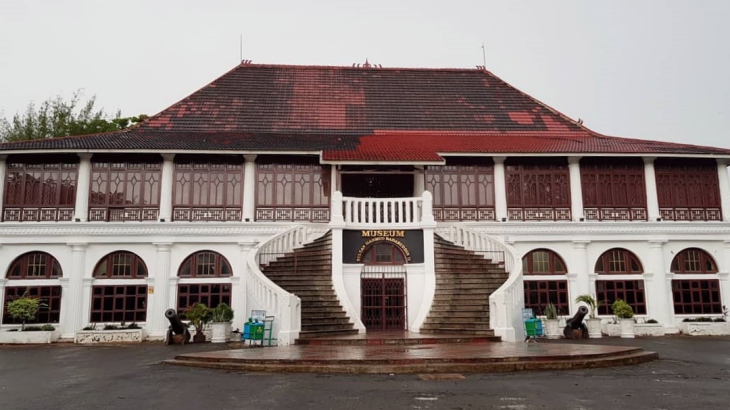 Ampera Bridge which is one of the main attractions of the city of Palembang standing can almost be said to be close to this museum, after the historical tour in this mesuem we can immediately see the beautiful charm of the Ampera bridge.

Ampera Bridge which is one of the main attractions of the city of Palembang standing can almost be said to be close to this museum, after the historical tour in this mesuem we can immediately see the beautiful charm of the Ampera bridge.

Historical Tourism Museum of Sultan Mahmud Badaruddin II. This museum has historical heritage about Palembang. Located on the banks of the Musi river, this museum exhibits various collections from archeology, ethnography, biology, art and especially information about currency collection (numismatics) to study or currency collections.

In this museum, you can find various historical relics from the collections of Kedukan Bukit inscriptions, ancient Buddha statues and Amarawati Ganesha, as well as various other historical remnants including those from the Sriwijaya era.

Sultan Mahmud Badaruddin II was the ruler of Palembang from 1803 to 1821. This museum was once the palace of the Sultanate of Palembang Darussalam. Originally referred to as the Kuto Kecik Palace or the Kuto Lamo Palace, this building together with the Palembang Grand Mosque was built during the time of Sultan Mahmud Badaruddin Jayo Wikramo or SMB I. Unlike other buildings of the same era that used wood, this palace was built with bricks. With the arrival of the Dutch in the 17th century, the palace was occupied by the colonial army. During the Palembang War in 1819, the Dutch landed 200 of their troops stationed at the Kuto Lamo Palace. After Sultan Mahmud Badadruddin II was captured and exiled, the Dutch looted and destroyed buildings in Palembang, including the Kuto Lamo Palace. In 1823, the Netherlands began to reconstruct the ruins of buildings. The ruins of the Old Kuto Palace, rebuilt as the residence of the commissioner of the Kingdom of the Netherlands in Palembang, Yohan Isaac van Sevenhoven. In 1842 the building was completed and locally known as the cochlea. 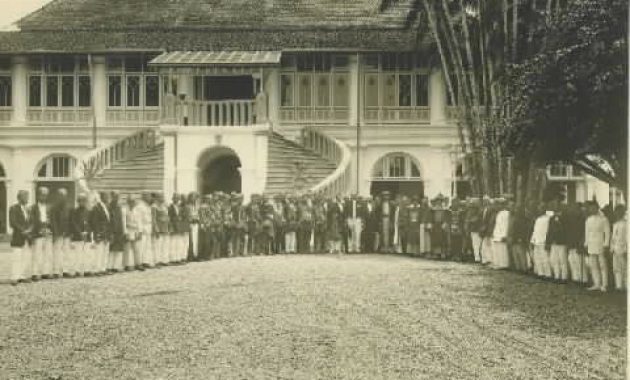 History plays an important role in the existence of this building when Japan arrived in the 1940s. With World War 2 raging in the Pacific, this historic building was used by Japan as their military base. After Indonesia proclaimed Independence in 1945, this building became the military base of Indonesia's IV regiment: Sriwijaya.

Sultan Mahmud Badaruddin II Museum is the perfect place to explore Palembang's history. From the Srivijaya era, the Sultanate of Palembang Darussalam, the Dutch colonial era and the Japanese occupation to the early days of Indonesian independence all presented in 368 of his collection. The architecture of the building itself is unique because it is a combination of the Dutch colonial period and the original style of the Palembang palace.

After exploring Sriwijaya's history and heritage, one of the choices to spend time around Ampera,  we can go on a culinary tour to enjoy a variety of palembang food flavors, or just want to sit and relax in places in the pier point building, or want to shop at the 16th market, and just invite children to play around the banks of the river musi.

When hungry, don't be afraid of finding food near this museum. We already know that Palembang itself is a city that is rich in culinary flavors. If you feel hungry and don't want to go far to look for a place to eat, around the museum there is a floating restaurant, you can enjoy the sensation of eating on a big boat. This restaurant provides palembang food such as pindang, pempek and other palembang specialties. You can enjoy going back and forth fishing boats that adorn the scenery around and add relaxed at lunch. In the afternoon you can enjoy foods such as tek tek tek, nasigoreng, pempek and there are many other foods on the banks located in front of the museum itself.

After exploring Sriwijaya's history and heritage but not feeling hungry, shopping may be an option to spend time around Ampera. We can buy souvenirs that are around the river or shop at the shops in Pasar 16 Ilir. About 2 kilometers from there, you can also find the center of songket. Then the next 50 meters is the center of Lekeur's carving. In the Sultan Mahmud Badaruddin II Museum itself, there are shops that sell various kinds of souvenirs.

When the afternoon on the banks of the river that became the pride of Indonesian society usually many people who end up, whether it's Palembang people themselves or tourists. On the banks of the musi river, usually many people are peddling and renting out games such as mini scooters, small rickshaws, odong2 and many others. Coupled with other children's toys. Children can enjoy playing here.

Ampera so a place to hang out young people?

Well, there is a "dermagapoint" building located near the museum here, usually a lot of young people who spend time eating or just hanging out. They can enjoy panoramic views of Ampera and the Musi River from this building. In this building there is not only one place to eat or hang out, but there are many places in this building.

If seen from some of these things you can imagine how nice it is when visiting the Sultan Mahmud Badaruddin II museum, after knowing the history and adding knowledge we can directly relax around this museum.