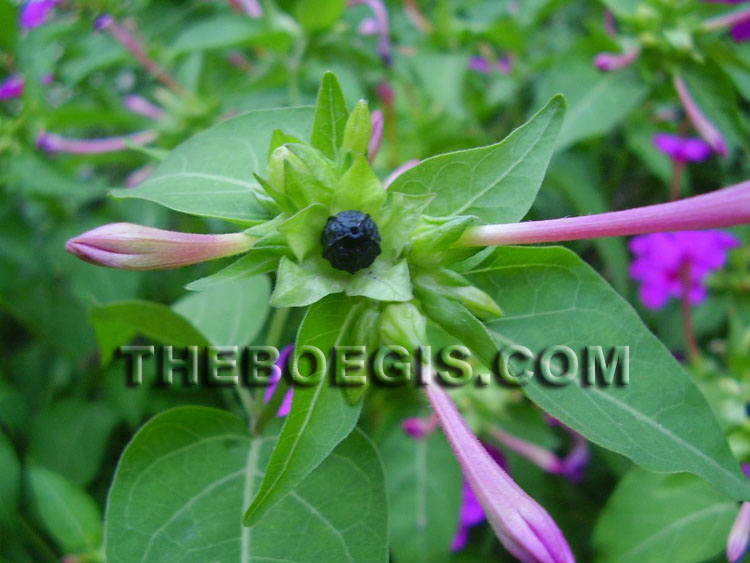 The Four O'Clock Fireworks (Mirabilis Jalapa), the name is quite strange? Why is it said four Kembang o'clock? This plant usually blooms in the afternoon about four o'clock, well this is the characteristic of this plant, so as to facilitate remembering and knowing this plant, then named Kembang at four. Description of this plant, namely the form of Terna, high to 50 cm. The flowers are red, white or yellow, blooming in the afternoons and closing in the morning. This herb has a sweet, odorless, mild and neutral flavor.

Benefits and efficacy of flowers at four as a traditional ulcer drug, natural acne cures, dysentery drugs, urinary tract infection drugs, inflammation of the prostate gland and as a throat drug. Four o'clock flowers do have a lot of efficacy and benefits, but pregnant women are forbidden to use the herb from this herb because it can have a bad effect on fetal development.
Flower at four, the flora that is the identity of Lampung province is actually not the original flower of Indonesia, but rather from Mexico. Flower at the Pmpat or four o'clock plant is also called Asar Flower, called the flower at four o'clock or the target interest because it is a type of flower is ordinary bloom around 4 pm.

Here are the benefits and efficacy of flower at four o'clock:


Ulcer drugs
Put a handful of petals at four o'clock over the fire and cool down the four flower leaves to the boils and let stand until the boils dry out.

Acne medication
Break the flowers at four and collect white powder resembling the powder from inside the fruit, mix it with water to resemble cream and then applied to acne, do it regularly until the acne thinning and finally disappear.

Drug dysentery
Take 30-60 gr Flower at four, mix with 30 gr of fresh yam and 500 cc water, boil until boiling until the volume of water is 250 cc. Strain the decoction of water and drink until the dysentery is reduced/cured.

Urinary Tract infection Drug
Use 9-15 roots gr flower at four dry or 15-30 gr root flower at four fresh. Rebuslah with four cups of water to the left half, strain the water stew and drink 2x/day each one glass.

Drug inflammation of the prostate gland
Use 30 gr flower at four, 30 gr Sambilata and 70 gr Watermelon white layer. Clean all ingredients and boil with 800 cc of water until left half then strain and drink the water until the body feels good and fresh.

Sore throat drugs
Use a handful of plant roots at four, wash and clean the ingredients, then make the juice/blender and grab the saris. Drink the juice regularly until the body/throat feels good/cured.

That is the explanation of the benefits of four-quarters of the health of the body useful to treat various diseases such as those listed above in a natural traditional way which is very efficacious and proven. Welcome to try it at home and hopefully useful for all of you.