In the old days before the creation of OSI, doing a communication on the computer network is not easy because each vendor and developer at that time use their respective network protocols, thus complicating users when going Exchanging data from a computer with another computer due to the network protocols that each computer has different.

Each layer has its own role so that at this time we do not have to worry about the problem of computer protocols what you will use to be able to communicate with your friends. For more clarity on the definition of OSI layer or OSI model, seven layers and how it works, see the explanation below.

Definition of OSI Layer (OSI Model)
Open System Interconnection or commonly abbreviated OSI is a reference model in the form of a conceptual framework that defines the standard of connection for a computer.

The purpose of this OSI reference model is to be a referral for vendors and developers so that the products or software they make can be interporate, which means it can cooperate with other systems or products without having to Make special efforts from the user.

Seventh Layer on the OSI Model 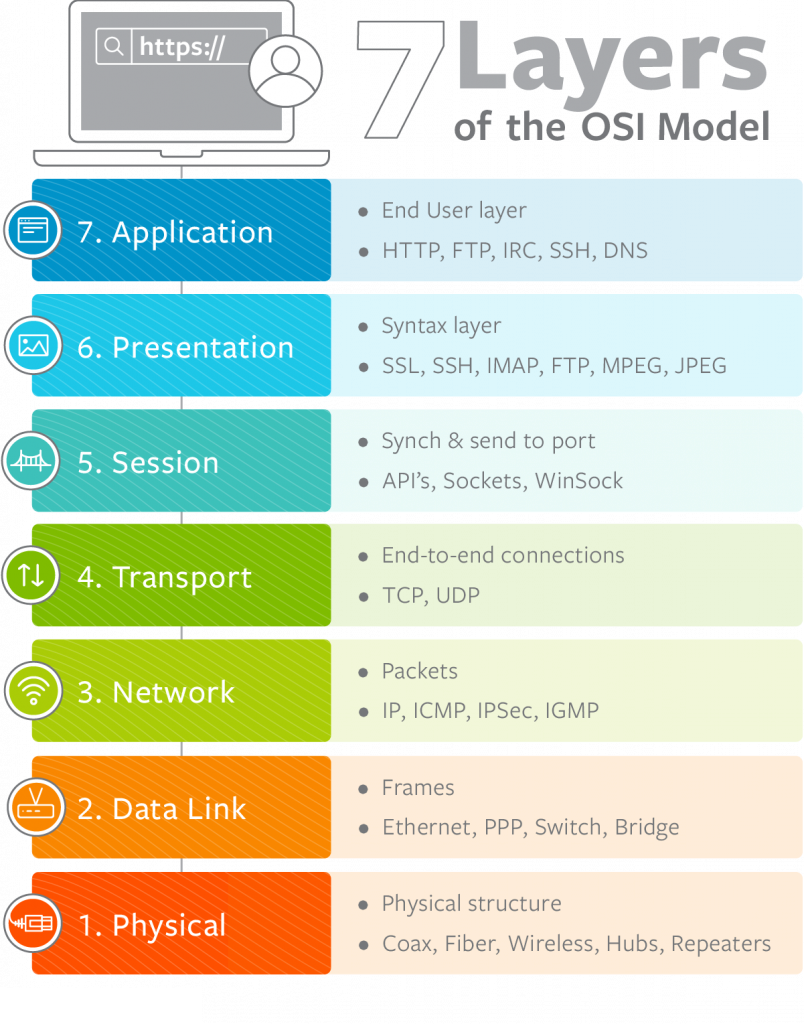 In the process the OSI model is divided into seven layers which each layer has a role related to the layer above with the layers underneath. Here's an explanation of the seven OSI layers.

In physical layer data is transmitted using signal type that supported by physical media, such as voltage, cable, radio frequency or infrared or light.

2. Data Link Layer
The data link layer is responsible for checking for errors that may occur during the data transmission process and also wrapping the bits into the form of data frames. Data link layer also manages physical addressing scheme such as MAC address on a network. The Data link layer is one of the OSI layers that is quite complex, therefore this layer is then subdivided into two sublayers, namely the Media Access Control (MAC) layer and the Logical Link Control (LLC) Layer.

3. Network Layer
The network layer is responsible for specifying the path to be used to transfer data between devices within a network. The network Router operates on this layer, which is also the main function of the layer network in terms of routing.

Routing allows packets to be moved between computers that are connected to each other. To support this routing process, network layers store logical addresses such as IP addresses for each device on the network. Layer Network also manages the mapping between the logical address and the physical address. In IP network, this mapping is done through Address Resolution Protocol (ARP).

4. Transport Layer
Transport layer is responsible for sending messages between two or more hosts inside the network. The Transport layer also handles splitting and merging messages and also controls the reliability of the given connection path. The TCP protocol is the most frequently used example of transport layer.

5. Session Layer
Session layers are responsible for controlling session connection dialogs such as assigning, managing and disconnecting between computers. To be able to form a communication session, session layer uses virtual circuit created by Transport layer.

How OSI Layer Works
The process of data from a host to another host on a network is fairly long, all the data must go through each layer of the OSI to be able to reach the destination host. Example for example when you will send an email to another computer on a computer network.

The process that occurs first is in the application layer, namely providing an email application program that will be used to send data to other computers over the network. In the presentation layer the email is then converted into a network format. Then in the session layer will be set up a travel session data from the start formed until the completion of the delivery process. 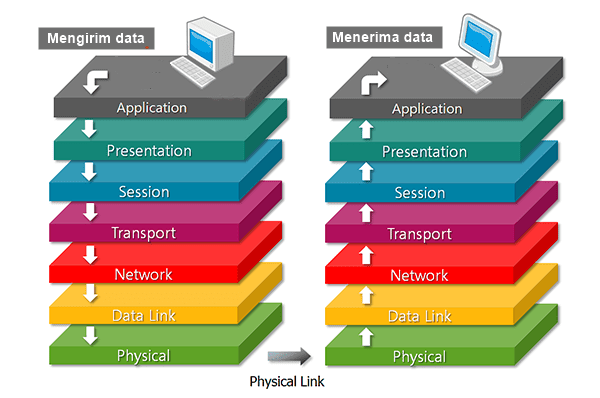 In the transport layer data is broken into small parts and then will be collected back on the transport Layer SI receiver. On the network layer will be created an address and specified the path that will be passed by the data to get to the destination. In the data link layer the data is formed into a frame and the physical address of the sender's device and the receiver will be set.

Then on the last layer physical layer sends the data through a network medium, go to transport layer SI receiver. Then the same flow occurs on the destination computer but starts at the bottom layer (physical layer) to the top layer (application layer).