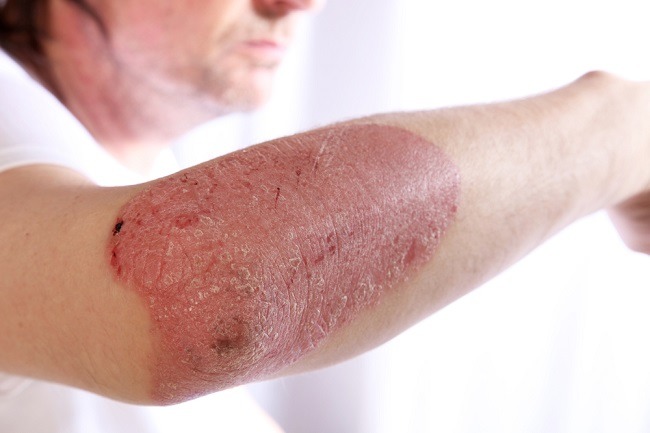 Psoriasis itself is a chronic skin disease characterized by redness, sometimes in the form of scales on the skin of the epidermis. Psoriaris has various forms of appearance according to its type. There are many types of psoriasis. Later we will discuss one by one.

Jelly Gamat Gold-G is a natural herbal product that was created to provide the best and easiest alternative solutions in overcoming various complaints of diseases, one of which is psoriasis, by utilizing the best natural ingredients that have been clinically tested and have excellent ingredients for health and efficacy. for the treatment of diseases that even its efficacy in treating diseases has been shown to be able to be an intermediary in obtaining healing from a disease that is whacking. Natural ingredients that are the basis for the manufacture of Jelly Gamat Gold-G herbal medicine are sea cucumbers or gamat, a marine animal that has long been used as a traditional ingredient to treat various ailments. The type of sea cucumber used is the best type of sea cucumber, namely the type of golden stichopus variegatus or golden sea cucumber.

For most people, psoriasis is a skin disease that makes you feel uncomfortable, but apart from that, psoriasis also causes a very itchy feeling on the skin. There are 5 main types of proriasis, namely Plaque Psoriasis, Guttate Psoriasis, Inverse Psoriasis, Pustular Psoriasis, and Erythodermic Psoriasis. Apart from these types, there are also types in the sub-category of psoriasis, usually distinguished by the location where the disease occurs on the body. Let's take a closer look at the causes of this psoriasis skin disease through the pictures below.

Plaque Psoriasis
Plaque psoriasis is the most common form of psoriasis that humans suffer from. It usually affects more than 80% of people with psoriasis. Some people have hereditary genes related to psoriasis, but only a part of them causes psoriasis to appear. There is no definite cause and no definite cure for psoriasis.

Guttate Psoriasis
Guttate psoriasis appears as small red dots on the skin. This is the form most often found in psoriasis sufferers apart from Plaque Psoriasis. These red spots are usually not as thick as plaque psoriasis, but they may develop into plaque psoriasis over time if not treated seriously.

Flexural or Inverse Psoriasis usually appears in skin folds (usually the folds of the breasts, armpits, or groin). Usually very red, shiny and soft. Usually people who suffer from Inverse Psoriasis have another type of psoriasis on their body.
Sweat and moisture from the surface of the skin keep Psoriasis from damaging the layers of the skin. A variety of special drugs for this type of psoriasis are available in the market.

Pustular Psoriasis
Pustular Psoriasis is characterized by white bumps surrounded by red, inflamed skin. The pus in the boil is not dangerous or contagious. Usually, crusting of the skin can also occur. There are 3 types of pustular psoriasis, namely: von Zumbusch, Palmoplantar pustulis, and acropustolis.
Each of the three sub-categories has different symptoms and levels of danger. Pustular Psoriasis infects areas of the body, such as the feet and hands and all skin surfaces. Some people sometimes suffer from pustulis and disappear on their own and then appear on their own. The abscess requires special care.

Nail Psoriasis
Although it is not a special category of psoriasis, nail psoriasis is another form of psoriasis that affects more than 50% of psoriasis sufferers in the world (Kahl, Hansen and Reich 2012). This condition is sometimes confused between nail infections and psoriasis.
Nail psoriasis causes the nails to be dead, branched, broken and white under the nails. There is no specific treatment for Nail Psoriasis, some local treatments may be able to make nails look more beautiful and well-groomed.
pictures of skin diseases

Scalp Psoriasis
Some types of psoriasis may appear on the scalp area. Some even make dandruff inflammation very annoying, sometimes even causing pain and itching on the scalp. It can also spread to the neck, face and ears and can be a large patch or a collection of small patches.
In some cases, scalp Psoriasis can make hair health disturbed. Excessive scratching can even lead to infection and hair loss. This condition can also cause stress and embarrassment in the environment. Special treatment may be needed, and usually takes about 2 months plus regular maintenance every day to maintain scalp hygiene.
pictures of psoriasis disease

Psoriatic Arthritis
Psoriatic Arthritis is very painful and this condition also causes the sufferer to experience physical difficulties. Usually attacks the joint area, and sometimes becomes very dangerous in the joint area of ​​the hand. There is no specific treatment for psoriatic arthritis, but pain can be relieved by arthritis treatments such as diclofenac potassium, and mefenamic acid.

Erytrhodemic Psoriasis
This form of psoriasis has a burn-like appearance to the skin. Covers most areas of the patient's body, sometimes peeling of the skin occurs in several parts of the body. This type of disease is very painful and usually requires intensive hospital care.
Erythrodemic psoriasis can coexist with pustular psoriasis. It can also be caused by excessive sun radiation, infection, alcoholism, stress and excessive use of psoriasis medications.

Psoriasis Disease Treatment
Although there is no definitive treatment for psoriasis, painkillers are usually used, such as corticosteroids, mefenamic acid, and so on. Pharmacists also find it difficult to make drugs that can generally be used in all types of psoriasis, usually treatment is given specifically for a particular type of psoriasis.

Those are the details about how to deal with psoriasis that I have presented so that you know about this disease so that you always keep your body healthy from disease with a natural lifestyle and hopefully it is useful for all.