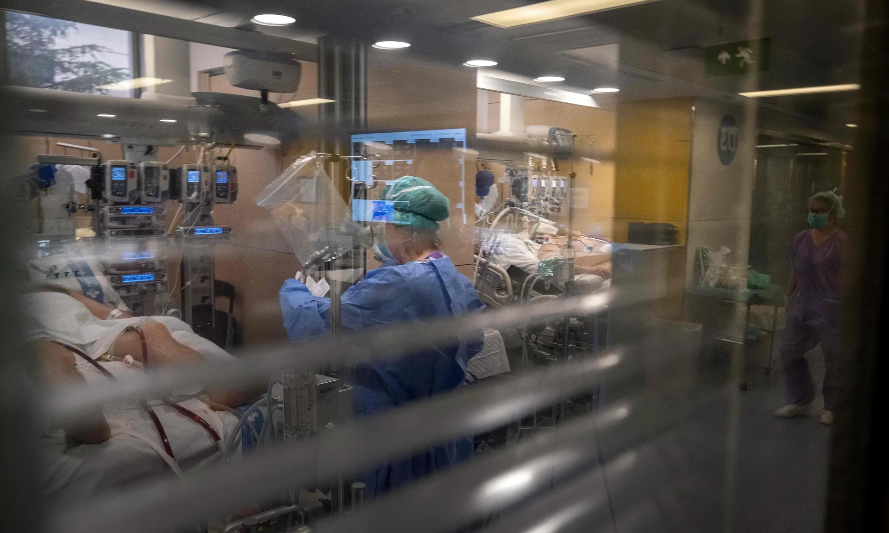 Top European teaching hospitals from Sweden to Italy have said they will run out of vital drugs for Covid-19 intensive care patients within two weeks, as Spain passed 10,000 deaths from the pandemic and the US reported record jobless numbers.

As confirmed cases neared a million around the world and deaths passed 50,000 despite almost half of humanity living in some form of lockdown, the hospitals said that unless countries cooperated to ensure a steady supply, the critically ill would soon be deprived of essential medicines.

Hospitals needed protective gear and ventilators but also drugs to treat intensive care patients, the European University Hospital Alliance said in a letter to governments. Stocks of muscle relaxants, sedatives and painkillers were likely to run out in two days at the hardest-hit hospitals and in two weeks at others, they said.
“It is extremely worrying that overworked and often less-experienced nurses and doctors-in-training, drafted to fill the gaps, have to use products and dosages that they are not used to,” the group wrote on behalf of hospitals in Austria, Britain, France, Germany, Italy, the Netherlands, Belgium, Sweden and Spain.

Spain, which has reported the highest number of deaths in the world after Italy, posted another record single-day death toll of 950, and a total of 110,238 cases. It said, however, that the rates of new infections and deaths continued a downward trend.

The data showed that the curve had stabilised and the epidemic had entered a “slowdown” phase, said the health minister, Salvador Illa, reporting an 8% increase in new cases from Wednesday to Thursday – consistent with recent days, and well down on the first half of March, when cases were increasing by about 20% a day.

The infection rate in Italy, which on Thursday reported 760 new deaths, bringing its total to 13,915, and a total of 115,242 cases including deaths, recovered and current cases, has also slowed. The number of new daily cases is now rising by about 3% compared to highs of 15% during the early phase of the emergency.

The US now accounts for almost a quarter of reported global infections. “We’re going to have a couple of weeks, starting pretty much now, but especially a few days from now, that are going to be horrific,” said Donald Trump, who was criticised for initially playing down the virus but has stepped up containment efforts in recent days.

According to the Johns Hopkins University tracker, the coronavirus pandemic has infected more than 980,000 people and killed more than 50,000. The head of the World Health Organization, Tedros Adhanom Ghebreyesus, said on Thursday that there had been a “near exponential growth” in new cases.

The secretary general of the United Nations, António Guterres, called for a global and coordinated response to the pandemic. “Only by coming together will we be able to face down the Covid-19 pandemic and its shattering consequences,” Guterres wrote in the Guardian, saying the world faced a challenge of unprecedented magnitude.

The consequences for the global economy have been dramatic. The US announced on Thursday that 6.65 million workers had filed for unemployment benefits last week, double the number registered the previous week and by far the most ever recorded. Economists have said US job losses could surge to the previously unimaginable range of between 10 and 20 million in April.

“In this crisis … either Europe stays true to its political roots and it will thrive, or Europe gives in to panic and national selfishness and it will disappear,” Le Maire said, reiterating France’s call for a common fund to help EU member states kickstart an economic recovery and bolster healthcare capacities over five to 10 years.

The president of the European commission, Ursula von der Leyen, told Italy in an open letter published in La Repubblica newspaper that EU member states were ready to help it deal with the crisis after initially focusing on “their own home problems”.

The commission proposed a bloc-wide guarantee that could raise €100bn to aid national unemployment schemes.